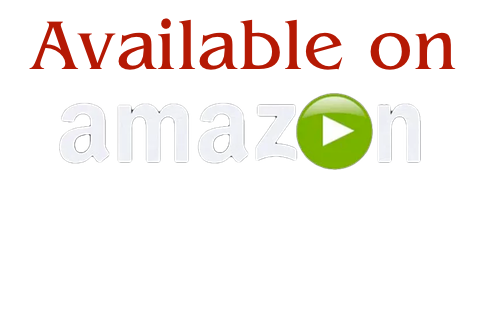 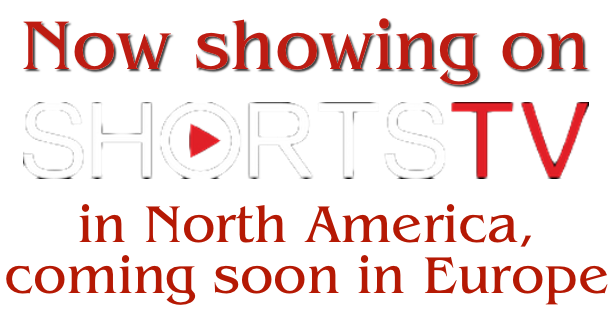 Blood Shed continues to cook up a storm! Ever since our amazing premiere at London's FrightFest, where some of our lovely cast and crew came along to support us: 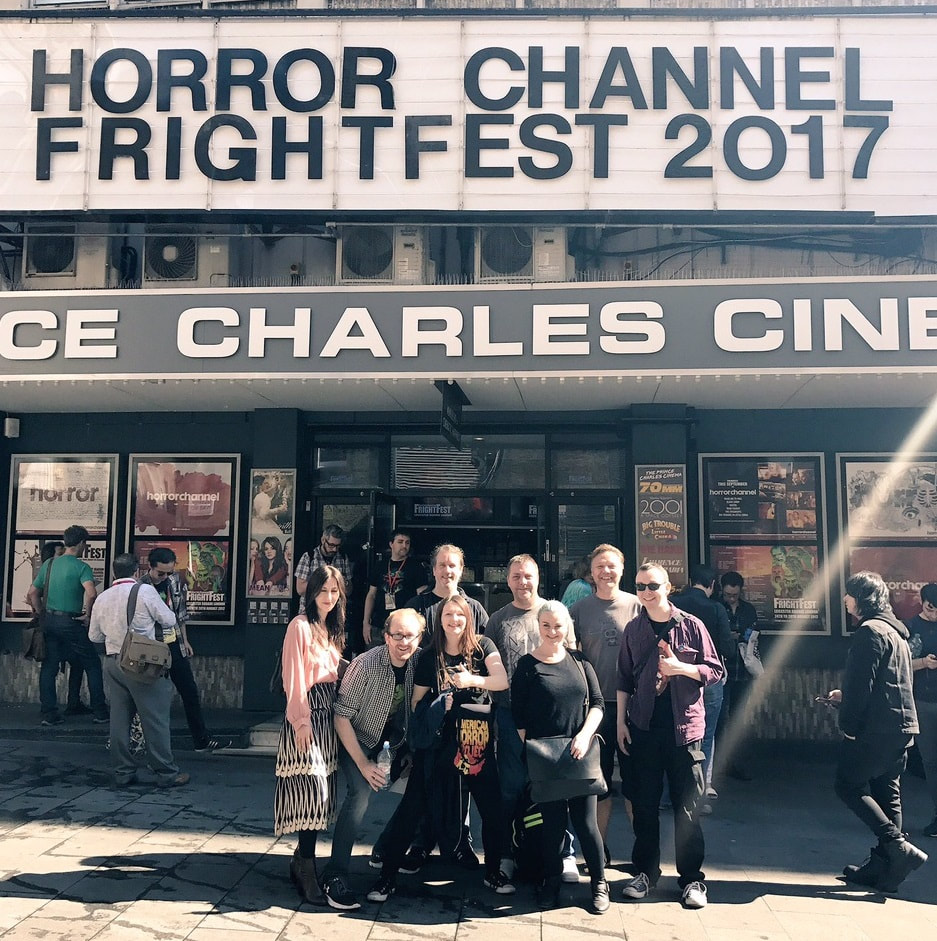 ​We're delighted to announce that... ​Blood Shed is now an AWARD-WINNING film! Yes, we scooped the coveted Audience Award at Wimbledon International Short Film Festival, fighting off stiff competition from films across genres. This means a lot to us as we love winning over the audience and making viewers happy - it's always something we strive for. 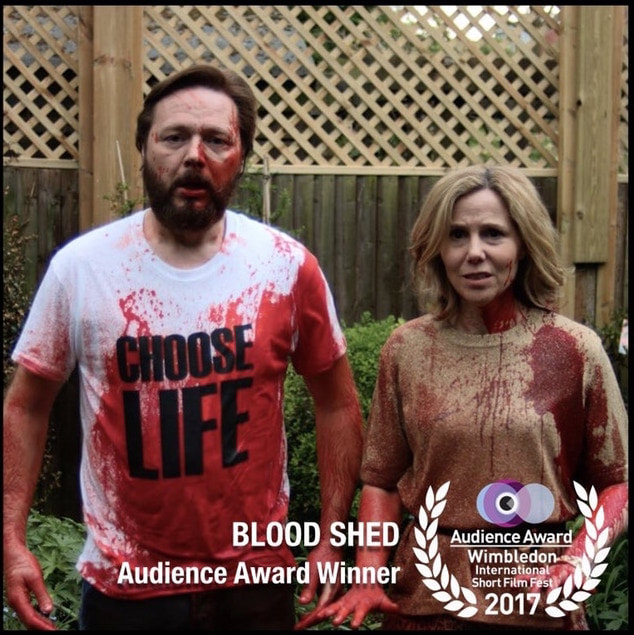 ​ We had an amazing time at the screening, and were also nominated for the Best London Filmmaker award. There's nothing like hearing a big tent crammed full of people chuckle at a sweary man-eating shed film. 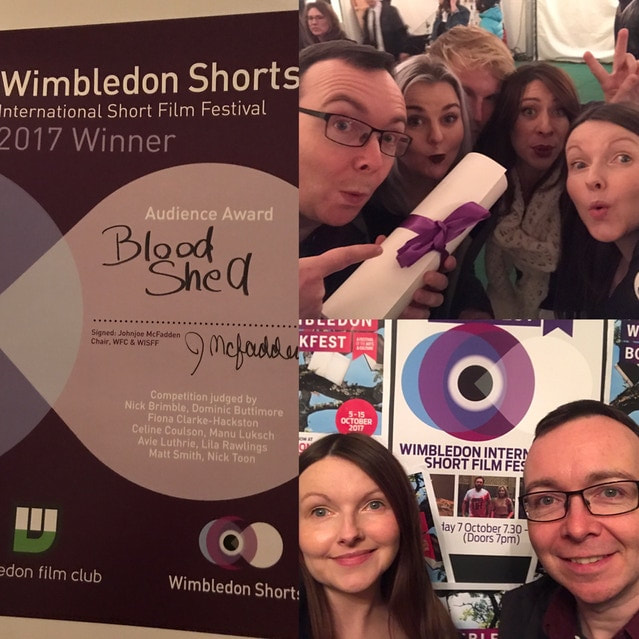 ​Our little sheddy tale of guts and gore has brought us even more glory since then, notching up several more awards! We were stunned to wake up to the news that Blood Shed scooped THREE awards at the prestigious Knoxville Horror Film Fest!
​We were crowned Funniest Film, James Moran was named Best Director for a short, and we won Best Script for a short film, too. As Producer, Co-Writer and Production Designer, Cat is grinning from ear to ear and thrilled that our rather unique tale has found its place on the film scene so quickly. 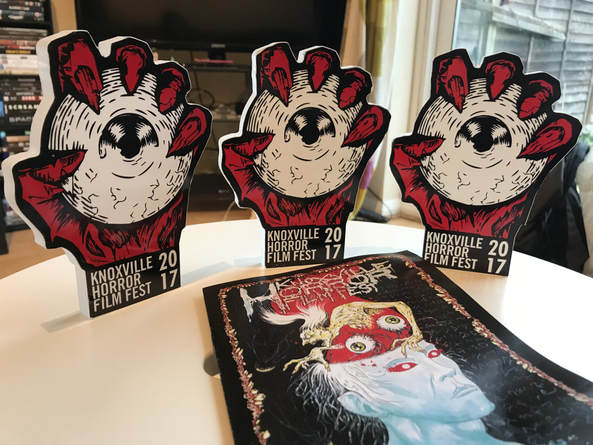 ​And there’s been even more glitz and glory for the film thanks to the amazing Sick Chick Flicks Film Festival in North Carolina!

The festival team kindly picked our star, Shaun Dooley, as the winner of the Best Male Lead Award. Here’s a quick peek at the trophy that is currently en route – what a hot bird! We can’t wait to unwrap this little chick. 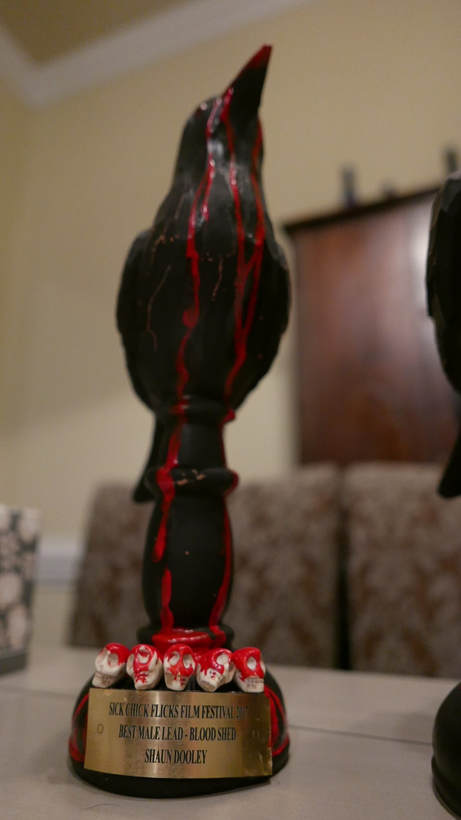 Huge thank you to these festivals and their judges, but also to our supporters who helped get this film made and spread the word about it. It’s an honour to share it with so many like-minded shed-fanciers. 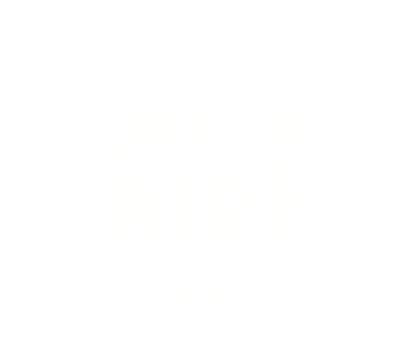 We have more screenings coming up. We’re screening at the awesome Ax Wound Film Festival in Vermont on Saturday 18th November, then we’re back in London on home turf for the Underwire Festival 2017 where we’ll be screening at the Prince Charles Cinema on Friday 24th November. Come and show your support if you can. Cat is nominated for their Best Producer award and at more than 8 months pregnant, she is extra, extra emotional about this nomination!

In other news, James and Cat are guests on the latest edition (season 2, ep 7) of the brilliant film podcast Casting the Runes! We were chuffed to chat with the lovely Runes team and had a great time talking about Creepshow and Blood Shed. Have a listen to the episode here! We hope you find the things we say insightful as well as plain odd, weird and strange.
Trailer unleashed! Film completed! Merchandise coming soon!
We have lots of news to share with you this week!

First, Blood Shed is now complete. Hoorah! We spent lots of time lovingly and carefully crafting this uniquely beautiful demon baby, ensuring that the creative forces behind the film are super dooper happy. The film hits festivals this Summer 2017, and will be made available to our Kickstarter backers for viewing soon.

Second, our trailer has just been unleashed! Here it is! Take a peek... If you dare! We hope this gives you an enticing, intriguing flavour of the tone, sound and look of the film. Enjoy!
We also have a flurry of film festival news announcements coming this week! BIG news. Keep an eye on our Twitter page and Screenings page of our website for more details.

We've been hard at work designing and ordering our official Blood Shed swag pack merchandise for supporters who pledged £100 or more. The merchandise will be strictly limited edition! If you want to get your hands on some but didn't pledge at the time, we may offer the occasional piece for competition prizes on social media, or at film festivals.

A final comment from us - we were saddened to hear the news of the passing of the legendary George A. Romero. The man was a genius and revolutionary indie filmmaker, creating the zombie as we know and love it. Without his great work, our lives would be all the poorer and our Halloween costumes a lot less interesting. A special thanks to him for his tremendous gift of Creepshow, one of the primary influences for Blood Shed. RIP George.
Poster artwork revealed!
We've been hard at work putting the finishing touches to Blood Shed in the edit. The film looks and sounds fantastic, and we're looking forward to sharing it with you when it's fully completed! We can barely contain our excitement!

BUT, we're delighted to finally reveal our OFFICIAL POSTER ARTWORK! 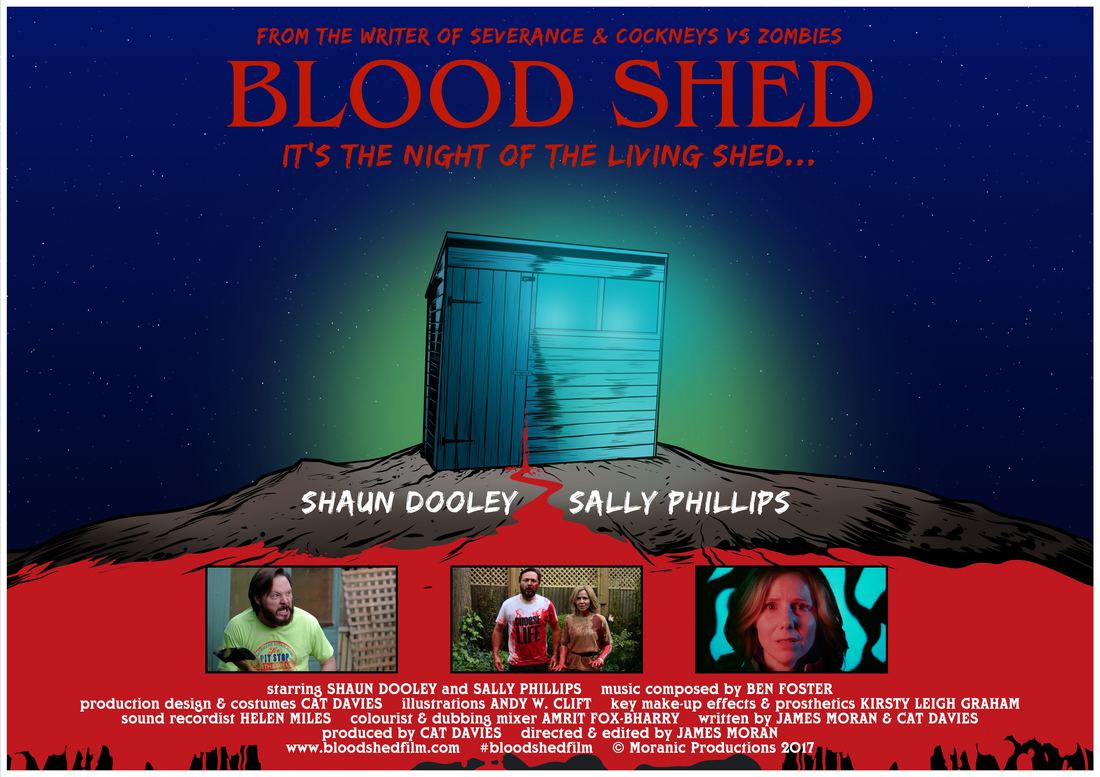 This collaborative piece is the fruit of our labours with the fantastic Andy W Clift! We've been inspired by classic posters and VHS covers from the 1980s, including The Evil Dead, Swamp Thing, Friday the 13th, Fright Night and the Creepshow-style illustrations that also feature in our film.

Feast your eyes on it! Complete with frames from the film showing our delightful stars Shaun Dooley and Sally Phillips in action! 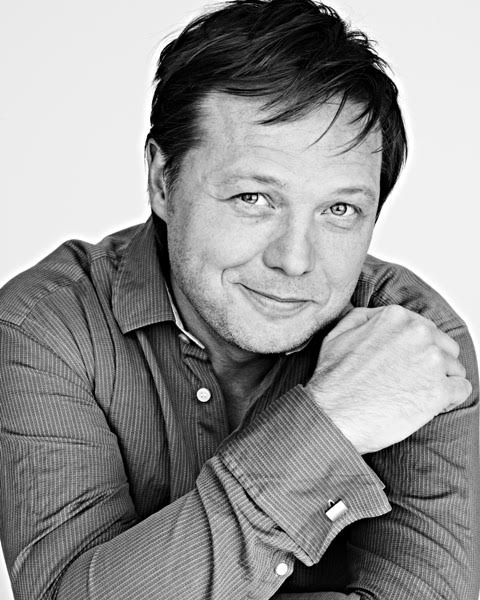 The award-winning SHAUN DOOLEY will play the role of Jack! Shaun is an amazing actor!


Shaun Dooley stars in the upcoming BBC One drama Gunpowder alongside Kit Harington and Liv Tyler, just the latest in a hugely impressive list of credits including a Royal Television Society North Award for Best Actor for Mark of Cain. From the heartbreak of Broadchurch and the Red Riding trilogy, to the hit movies The Woman in Black, The Awakening and Eden Lake, Shaun can always be relied upon to deliver a powerhouse performance. He showed a sensitive yet terrifying side in Misfits, as well as a barnstorming singing voice, proving his range, flexibility and fiercely unpredictable edge. He’s also appeared in the TV shows DCI Banks,
Ordinary Lies, Cuffs, Great Expectations, The Game, This is England ’90 and Exile. Whenever Shaun appears on screen, you never know what might happen next, but you can guarantee it’ll always be exciting, even when there’s a shed involved…

Shaun said, “As soon as I read the title it appealed to me. I grew up on horror and schlock movies and to be honest the thought of being covered in blood and entrails from a vomiting murderous shed?  Well, who in their right mind would say no?”

​
Jack loves a bargain. And he loves sheds. When he buys suspiciously cheap second-hand parts to build his very own dream shed, he and long-suffering wife Helen find they’ve got more than they bargained for: a killer shed with an appetite for blood. As the body count rises, and the shed’s ferocious appetite grows, Jack is faced with a horrifying dilemma. A comedy horror about a man’s twisted love for his shed… that eats people.

Blood Shed is a dark and twisted but laugh out loud comedy, with a Creepshow-style look and sound, synthesizer music, LOTS of Evil Dead-style blood, and comic book panels. It’s a love letter to the 80s horror anthology style, while telling a bizarre new tale with a unique monster.

​The team need to raise £10K to make this beautiful nightmare a reality, with a Kickstarter campaign live from 27th February - 27th March 2017. But they can’t do it without you! There are perks including signed goodies, exclusive extras and downloads, set visits, screening tickets, props, Executive Producer credits, writing workshops, script feedback, and even a piece of the shed!


The team’s pedigree…
​
James Moran, co-writer and director, will already be familiar to many fans of the horror and comedy genre through his writing on the movies Severance, Cockneys vs Zombies and Tower Block, and internationally acclaimed TV shows such as Doctor Who, Torchwood, Primeval, and Spooks. His other work includes 5-time Streamy Award nominated web series Girl Number 9, and several short films which he wrote and directed, including the award-winning hit Crazy for You (Best Horror/Sci-Fi, Crystal Palace International Film Festival), starring Arthur Darvill and Hannah Tointon, which screened at huge festivals across the globe and is now part of an anthology feature film. The team’s latest hit web series, Mina Murray’s Journal won the Best Screenplay award at Dublin Web Fest 2016, and will soon screen at HollyWeb in Los Angeles.

Moran says, “I’ve always loved 80s horror, and I’m really excited to unleash our evil beast. For years, we’ve seen people getting killed in or near cabins and outhouses, but we’ve never seen a shed itself actually doing the killing - until now!”

Cat Davies, co-writer and producer of the film, has worked professionally in production since 2005 at the BBC, ITV and as a publishing executive at BBC Worldwide managing the release of some of the UK’s biggest comedy titles. Cat is an expert in making the most of every penny and managing productions end-to-end. Cat is also an award-winning filmmaker, with her last short Connie starring Catrin Stewart, playing the international festival circuit and currently nominated for a prestigious iHorror award in the US. Cat is co-founder of Moranic Productions, with James.

Davies says, “we are desperate to bring this unique tale to life to delight horror, comedy and classic monster fans. We have a great team behind the project, and a united passion for the films and styles that influenced the script and visual concepts for the piece. We really need your help to make this happen and shoot the film in late April. We cannot wait to share Blood Shed with the world.”

Amazing cast and crew to be announced throughout the month-long campaign! 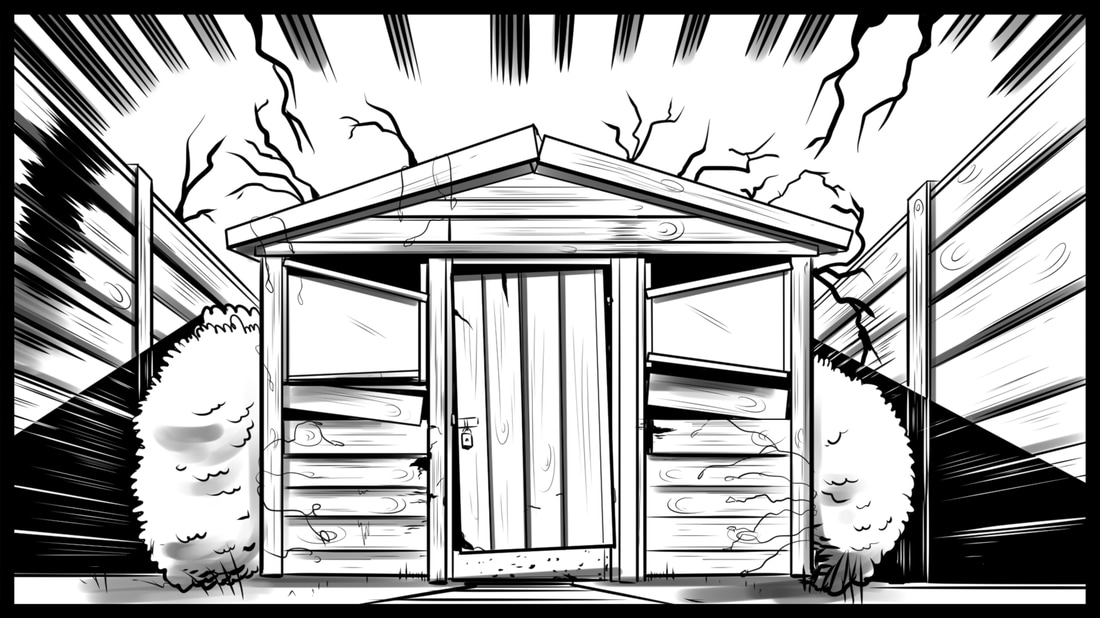